Dr. Estella Carpi was the Research Associate on the Southern Responses to Displacement project (2017 – 2022).

Estella received a PhD in Social Anthropology from the University of Sydney (Australia), with a study on social responses to crisis and crisis management in Lebanon. After studying Arabic in Milan and Damascus (2002-2007), she received a MPhil degree in Linguistic Anthropology.

Her work has focused on displacement, forced migration, social welfare, gender equality, and humanitarian aid provision in the Arab Levant and Turkey. She has lectured extensively in the Social Sciences in Italy, Australia, and Lebanon.

In autumn 2016 she was awarded a “Mobility, Displacement, and Forced Migration” CIRS-Georgetown University (Qatar) grant to carry out research on livelihoods and refugee self-reliance in northern Lebanon and southern Turkey.

During the completion of Estella’s doctoral dissertation she engaged with both Northern-led and Southern-led responses to internal displacement following the Lebanon-Israel war in July 2006.

During and since her PhD research, she has examined the ways in which social relationships, group identities, and people’s perceptions of crisis have been changing in response to diverse international and local service providers and within a climate of political disaffection.   Estella has also examined how such responses to displacement can be framed as secular and faith-based, both of which can struggle to gain people’s trust within a context of entangled domestic politics.

Estella’s previous research has explored the volatile nature of the North-South dyad.  International non-governmental organisations (INGOs) in Lebanon have increasingly hired local staff to comply with government regulations and tough immigration measures, while local NGOs are increasingly funded by external donors. In this context, Estella has questioned the way in which ‘the local’ is often romanticised or demonised by international actors. Additionally, she has questioned the extent to which INGO and UN agency representatives are stigmatised as either “passers-by” or “saviours” by local actors.

Estella is also interested in the provider-beneficiary divide and power imbalance that can distance local people from community providers. Estella’s research has demonstrated that, whatever the national source of funding for assistance provision, provider-beneficiary relationships are proven to function better within stronger and resourceful municipalities, where international support is provided on the basis of local consent or even local appeal.

Estella’s previous work has raised questions about the ‘whats’, ‘hows’, and ‘whys’ of Southern-led responses to displacement, which, at times, fall outside of the scope of either formal ‘humanitarian’ or ‘development’ agendas. Rather, they are configured as solidarity networks.

Estella’s research aims to inform a deeper and more nuanced understanding of humanitarian responses to human displacement.  By illustrating the inappropriate and distant response of the international humanitarian system to the needs and rights of displaced people, and the different strategies developed by local support providers, Estella’s past research engages with a series of key questions that are at the heart of the ERC-funded project, Analysing South-South Humanitarian Responses to Displacement from Syria: Views from Lebanon, Jordan and Turkey including:

Estella will investigate how responses to displacement developed and implemented by actors from ‘the global South’ are seldom taken into account in humanitarian policy-making.

Estella is presently writing her second book manuscript (in English): The Politics of Crisis-Making. Human Displacement and Cultures of Assistance in Lebanon, which focuses on how humanitarian aid provision contributes to making and unmaking social, political, and moral identities”. 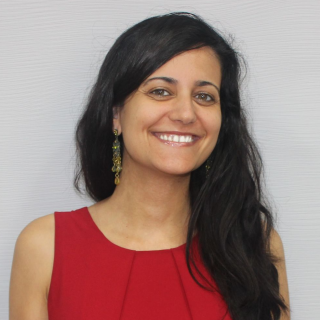 Estella Carpi is a Research Associate in the framework of the ERC-funded South-South Humanitarian Responses to Displacement from Syria: Views from Lebanon, Jordan, and Turkey. She is based in the Migration Research Unit, Department of Geography, University College London. She holds a PhD in Social Anthropology, and she is mostly concerned with humanitarian assistance, welfare provision, and identity politics in the Arab Levant, and Turkey.