Throughout history, assistance for people affected by conflict and displacement has been provided by state and non-state groups across the global South.

At times, state-led responses to displacement have been justified through reference to what is known as ‘South-South Cooperation’: processes through which states from the global South work together to complement one another’s abilities and resources, based on principles including ‘solidarity,’ ‘reciprocity’ and ‘mutual respect’. South-South cooperation is often seen as a way of enabling Southern actors to break down barriers and structural inequalities created by colonial powers, and is also often presented as providing an alternative mode of response to that implemented by powerful Northern states and Northern-led organisations.

With most refugees around the world remaining in the global South – typically in countries neighbouring their countries of origin – Southern states such as Lebanon, Jordan, Turkey and Iraq, have hosted millions of refugees for many years, often decades.

However, in addition to being ‘host states’, states from the global South also have a long history of supporting refugees in many other ways.

For instance, the countries of the Gulf have a long history of providing financial donations and material aid to refugees and people affected by tsunamis, earthquakes around the world, including through state-led faith based humanitarianism.

In turn, countries including Cuba, Venezuela and Brazil have funded and delivered medical assistance for refugees and people affected by disasters through sending internationalist medical brigades to refugee camps in North Africa, the Middle East and Sub-Saharan Africa and to internally displaced people across the Caribbean.

And countries as diverse as Cuba, Libya and Malaysia have developed international scholarship programmes and schools to provide secondary and university-level educations from refugees from across the Middle East and North Africa. As these and other case studies following the 2011 Arab Spring demonstrate, states from the South are more than either ‘donor states’ or ‘host states’: they often provide other kinds of assistance, with different motivations.

‘Solidarity based’ humanitarianism, as seen in Southern responses to forced displacement from Syria since 2011, has been demonstrated to stem, partly, from a will to enhance and strengthen the bond of unity and solidarity amongst Muslim peoples and states, including those states which belong to the Organisation of Islamic Cooperation.

However, solidarity based humanitarianism is not limited to faith-based expressions of solidarity. For example, the Brazilian President Rousseff, explained that Brazil’s response to the 2010 Haitian earthquake was a cooperative effort to support ‘brother and sister countries’ (Rousseff 2011).

And, indeed, it is not only states that act ‘in solidarity’ with refugees – local communities and members of civil society have also often explained that they offer protection and assistance to refugees out of solidarity, whether based on principles of faith or a commitment to promoting social justice. These include Tunisian civil society support for refugees displaced by the 2011 conflict in Libya, Lebanese community responses to refugees from Syria (including ‘The Wall of Kindness’ in the image below), and  the assistance provided by established Palestinian refugees in Lebanon to ‘newly’ displaced people from Syria.

From these examples it is possible to demonstrate that ‘solidarity based’ humanitarianism operates on a number of levels, ranging from state-led initiatives to civil society and refugee-refugee action and support.

The Southern Responses to Displacement project aims to examine these and other forms of response by states and civil society which are guided by principles such as ‘solidarity’ and ‘reciprocity’. In particular, it aims to examine how refugees from Syria themselves conceptualise of these forms of response: Do they refer to them as “humanitarian” responses, or political or religious imperatives? Do they consider them to be ‘alternatives’ to the assistance programmes funded and delivered by Northern states and NGOs?

The following readings provide a background on Southern-led responses to crisis – mostly conflict-induced displacement and forced migration – primarily by analysing Southern state and regional models of assistance and care in global South contexts. The studies variously examine aid provided by so-called ‘non-traditional donors’ in addition to the nature of encounters between local/refugee providers and refugee/displaced populations. 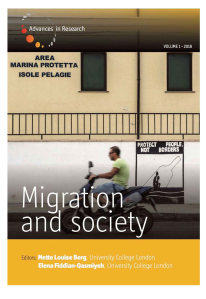 Migration and Society is an interdisciplinary peer-reviewed journal advancing debate about emergent trends in all types of migration. Issue 3 of Migration and Society (to be published in early 2020) will be dedicated to critical explorations of migration from and through the vantage point of Southern, decolonial, anticolonial and postcolonial theories and methodologies. The journal is inviting theoretically informed and empirically grounded submissions that seek to redress the long-standing Northern bias in migration studies.  Read more…